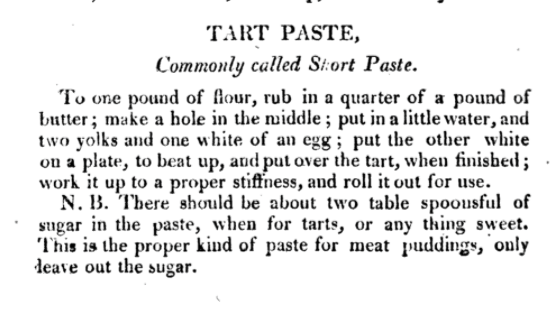 To one pound of flour, rub in a quarter of a pound of butter; make a whole in the middle; put in a little water, and two yolks and one white of an egg; put the other white of an egg on a plate, to beat up, and put over the tart, when finished; work it up to a proper stiffness, and roll out for use.

N. B. There should be about to table spoonful[s] of sugar in the paste, when for tarts, or any other think sweet. This is the proper kind of paste for meat puddings, only leave out the sugar.

From, A Complete System of Cookery, on a plan entirely new. By John Simpson. 1816 edition published in London. Page 508.

Implicit in this recipe is that the tart has a top crust. Top crusts were standard in British tarts until the last decades of the nineteenth-century. In British cooking, the topless tart was associated with France. In the American cooking tradition, one of the ways in which we seemed to have set out in the early nineteenth-century to differentiate our American culture from British was our early adoption of the topless tart as the standard for tarts and the renaming of the British covered tart tradition as “pie.”

Americans in first decades of the nineteenth-century were, of course, close to France. France had helped the British Colonists overthrow British rule while it had remained an enemy of Britain until the final defeat of Napoleon in 1814.  It is thus not entirely unexpected that American’s might have adopted a Francophillic tart style a bit earlier than the British.

When I tested this recipe the first time my daughter, age ten, didn’t want me to put on the top crust because, as she said, “Tarts don’t have a crust.”

This dough, with sugar, is intended for a covered dessert tart and without sugar for a covered meat tart. While the recipe doesn’t call for it, I suggest that you add salt when making this as a savory crust.

There is relatively little fat and relatively more water than in a modern “short paste.” The crust is therefore not light and fluffy. This is a crust from a different tradition and as such ads variety to your pie crust repertoire.

Dessert Tart: Add the sugar to the dough and fill with any fruit filling.

Savory Tart: Replace the sugar with salt. Fill with a vegetable, meat, or fish filling.

You need a pastry brush to brush the egg white onto the top crust. Besides the shiny top-crust, this is a classic American fruit pie.

60g  sugar if being used for a dessert tart

[5g salt if being used for a savory tart]

1 egg white set  aside in a small plate